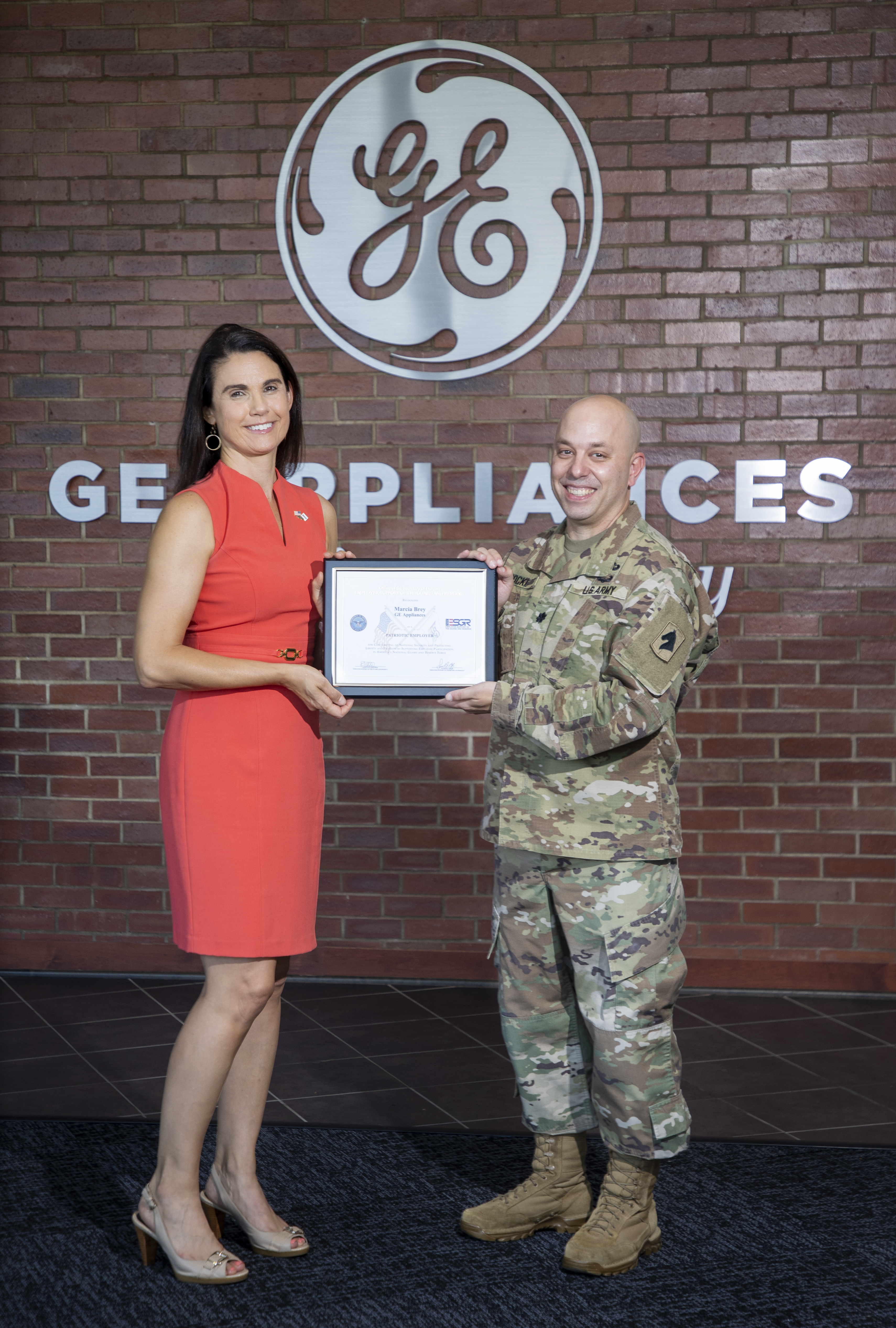 In 2007, Jonathan Gocke joined GE Appliances (GEA) and the Kentucky National Guard after serving in the Army for four years after college. His first role was on the Sourcing team.

Today, Jonathan is the Senior Warehousing Program Manager in Distribution and serves as the Deputy Commander (Lieutenant Colonel rank) for the 138th Field Artillery Brigade in the Kentucky National Guard, based in Lexington, Ky.

“I have a dual role as I am both the 2nd in Command ready to step in for the Commander, and I serve as Chief of Staff,” said Jonathan. Jonathan’s Brigade has 1,200 people spread across three Battalions, the Brigade Headquarters, and a Signal Company.

During his time in the Kentucky National Guard, Jonathan’s been activated twice for local concerns and once for a NATO exercise in Germany. The support he has received from his GEA team has been both excellent and unique.

“The company goes above and beyond to ease the stress of those on active duty,” said Jonathan. “Very few senior leaders in the Kentucky National Guard are in a traditional corporate role. They are typically government employees, and that is what makes GE Appliances unique. I can do both roles because GEA cares about both.”

Jonathan was recently nominated for the Army War College, the U.S. Army’s highest level of professional-military education. It is designed to develop senior officers with the strategic and critical thinking tools they need to lead in complex situations. It is a 2-year, rigorous, distance learning course that ends with a master’s degree in strategic studies. “We have readings from all sources including insights from business journals, leadership books, CEO writings, and specific leadership case studies that are incredibly interesting and applicable to not just my role in the Army but also my role at GE Appliances,” said Jonathan.

In June, Jonathan had Guard training at the same time GEA’s new Dixon warehouse was ramping up. When he goes to training, his Distribution colleagues treat it like they don’t expect to hear from him. “My team always has my back, but I checked in during downtime,” said Jonathan. “They don’t expect it, but their support makes me want to stay connected.”

The support he has received over the years led Jonathan to nominate VP of Distribution Marcia Brey for a Patriot Award. “I nominated Marcia for this award because she is the epitome of a supportive leader to our National Guard/Reserves,” said Jonathan. “She is phenomenal in her support of our military. When I told her I was selected for Army War College, she was overwhelmingly excited for me. The first thing she asked was what could she and the team do to make sure I would be successful, and that they would support me. Marcia implements a culture of trust and support throughout Distribution that allows all service members to continue to serve at a high level. She is the model for what this award is for, and we could not be as successful in our service without her support.”

Another area of support for veterans at GEA is the Veteran’s Network, an affinity group that has been a part of GE Appliances for 23 years. It can be tough transitioning to civilian life. The Veteran’s Network is filled with people who understand what new vets are going through and provides a support system and comraderie. The group also supports deployed soldiers from the company and elsewhere by writing letters, sending care packages, and staying connected with families.

GE Appliances provides support so employees can serve our country and take care of their families. If the employee’s orders are for less than a month, there is no change in their GEA pay status. If their leave is greater than a month, the company pays the difference between an employee’s military pay and their GEA salary for up to three years. 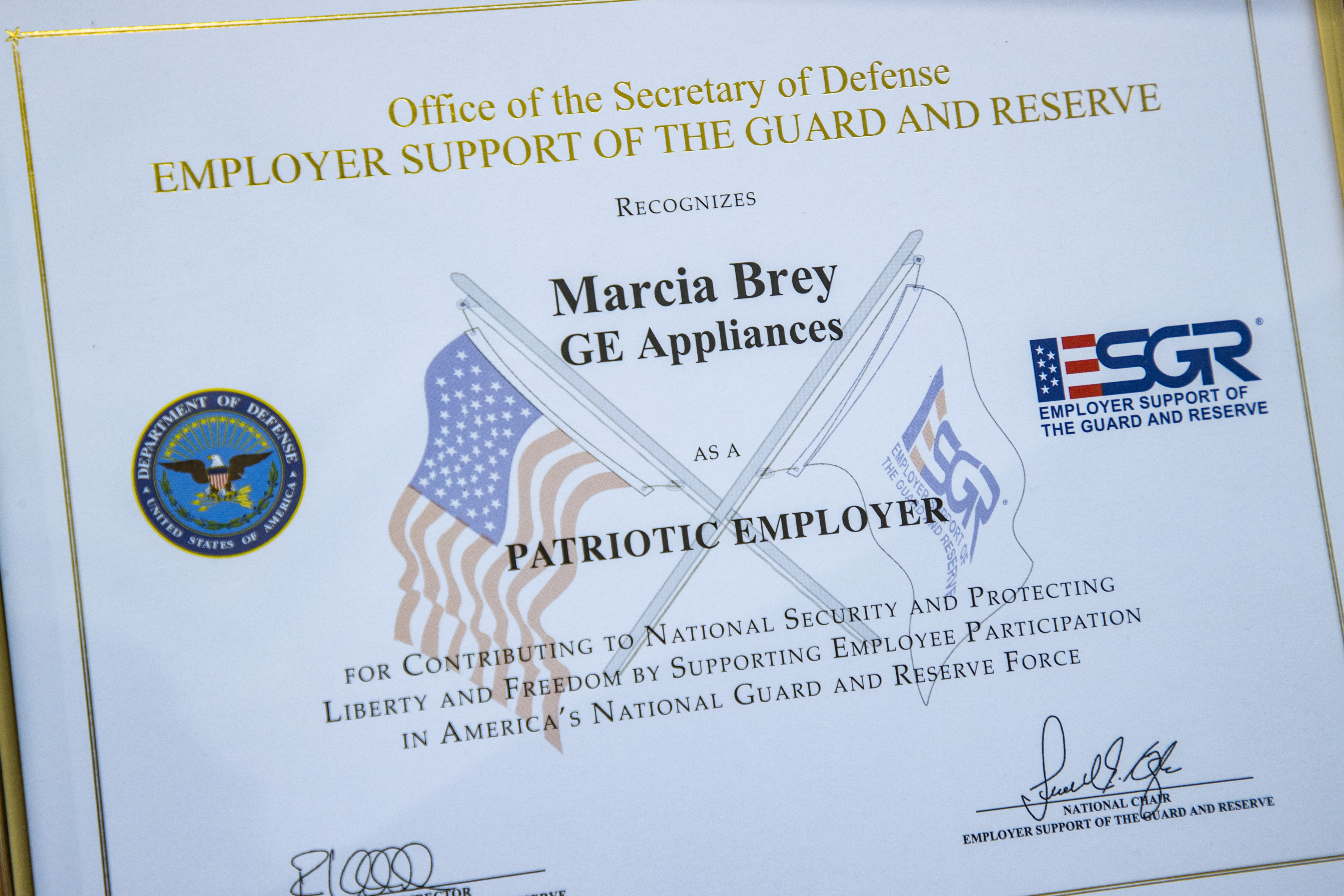 “GE Appliances is incredibly unique in our overarching culture and support of veterans, both past serving and those of us who are still serving,” said Jonathan. “Over the course of my 19-year military career, I have talked with hundreds of traditional civilian-soldiers like me, and I can speak with authority that there is no other company that matches GEA’s level of support. Between the culture that leaders like Marcia have instilled, to the support of the Veteran’s network sponsored by other business leaders, to the benefits our company provides, GE Appliances is the benchmark of a ‘Veteran Friendly’ company. I love both my careers, and it is because of leaders like Marcia that I can be successful in both!